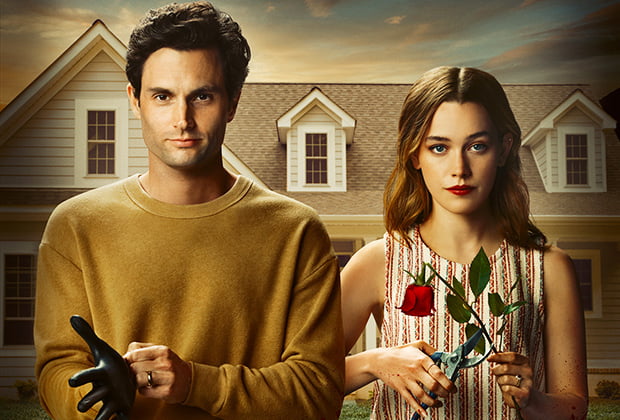 Netflix has released the You Season 3 trailer officially. It wouldn’t be wrong to say that it is much darker, and grimmer than before. Penn Badgley returns as Joe Goldberg and Victoria Pedretti as Loe Quinn in the third season of You, the blockbuster hit psychological crime thriller drama. The murderous couple struggles with suburban life after fleeing the city as shown at the end of Season 2 as both continuing to battle with inner deadly urges while attempting to look normal.

The revived season brings back Joe and Love as both the pair strive to establish their lives for their newborn in the recently released You Season 3 trailer. However, when he begins to fall for a woman in his neighborhood, Joe Goldberg doesn’t at all change and reverts to his compulsive tendencies. Love’s erratic behavior destroys her relationship as she jealously manifests itself through her personal dangerous behavior. The couple’s terrible truths compel them to remain united. You first aired on Lifetime prior to moving on to the online streaming titan, Netflix. As per Netflix, the crime thriller show has been one of its greatest successful tales, with over 54 million people watching Season 2 during the first 4 weeks of its December 2019 premiere. The Season 3 premiere date is set for October 15. Numerous fans of the murderous pair have also voiced their enthusiasm for the third installment on various social networking pages. Season 3 will include a total of 10 episodes.

Since we previously met Joe in Netflix’s You, he’d opted to start a family with Love—who even has a homicidal streak—after discovering her pregnant. If it was fear or love is difficult to tell. Season 2 finished with something like a suggestion that Joe will grow fascinated with his neighbor.

In the You Season 3 trailer, Joe tells his son, Henry, saying he married “the monster” out of a wish to become a great father to his son. However much  Joe and Love attempt to work together, Joe’s preoccupation with Natalie continues messing things up. He’s reverting to his former habits, donning a baseball cap and pursuing the lovely lady next door. Love, on the other hand, can feel something that is wrong. She chastises Joe for being constantly preoccupied, and afterward, she discovers a secret box containing Natalie’s things, including her undergarments. Amid some other sequence, Love asks Joe, “Why don’t you love me anymore?” in the rain, implying that their marital status is in peril. The pair tries couples counseling, but their erroneous therapist assures them, “Neither of you is going to kill your spouse.” You are many things, but murderers are not among them.” If only she had known! But, at the very least, they are still functioning as a unit. The last teaser image reveals them working together to cremate a dead body, indicating that not all chance is gone for the newlyweds—at least not in their very own warped notion of teamwork.

The new teaser has viewers captivated by the crime drama series, as Joe and Love find themselves as two compulsive murderers, willing to kill anybody that comes their way.