Skip to content
Home Celebrity Rihanna is trying hard to HIDE her Pregnancy? Rumor or Truth 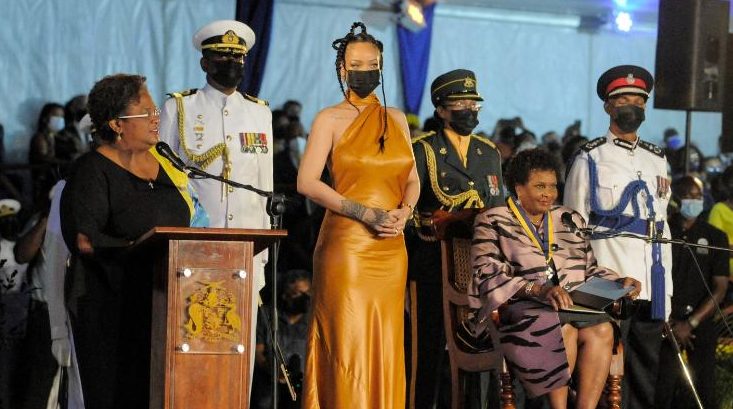 Robyn Rihanna Fenty who popularly goes by the name Rihanna or RiRi is a name that everyone around is well versed with. The woman has managed to succeed not only in the areas of singing or acting but has reached rights for her business skills for her skin and makeup brand Fenty and has also come out as a commendable fashion designer for her lingerie range that she launched and named Savage X Fenty. The popular star is currently dating A$AP Rocky who is a rapper by profession. Recently the actress was seen all over the internet for something that was not related to her profession but for her personal life. What was the news? Was it true or a rumor? Read everything we know about the news and how it is generated all of a sudden. The source from where the rumor started was the presidential inauguration ceremony that was held in Barbados, the hometown of Rihanna a few days back. What actually happened was that Barbados has severed all ties with the united kingdom and thus an event was held in Barbados itself. The Guinness world record holder was seen attending the event while she donned an orange-colored bodycon silk dress. The actress even received a national hero honor from prime minister Mia Mottley. The speech by the prime minister included that the nation was proud of the laurels that the singer manages to bring for the nation and even wished her success for everything that she pursues further. It was after the event that her pictures in the orange outfit went viral and fans tweeted that they could spot a visible baby bump on the Battleship fame. This tweet was further retweeted by many fans and thereafter a storm went down on the internet stating that Rihanna might be pregnant with her current boyfriend A$AP Rocky and would be expecting their first child anytime soon. Rihanna and her boyfriend were even seen at MET Gala where they gave an appearance together and ablaze everyone around including the fans. These rumors were ignited by one of the interviews that Rihanna gave last year to British Vogue where the singer was seen replying to the question that said where would Rihanna see herself in the 10 years that follow. She stated that she would be 42 by then and would even have three or four kids and would be ancient. Continuing further she even said that having kids has nothing to do with sharing them with a partner so it would not matter to her if she would have to raise them all by herself. HOW IT ALL ENDED

As these rumors continued spreading, a post was seen gaining popularity which showcased how a fan actually messaged Rihanna on her official Instagram account and asked her if she could attend the singer’s forthcoming baby shower. Interestingly the post even showed Rihanna’s reply to the message which was quite humorous. She, in a funny way, responded and said “You didn’t come to the previous 10 showers.” The way Rihanna replied to the message actually defied every rumor that was hitting the internet and thus actually put an end to the forthcoming baby rumors.