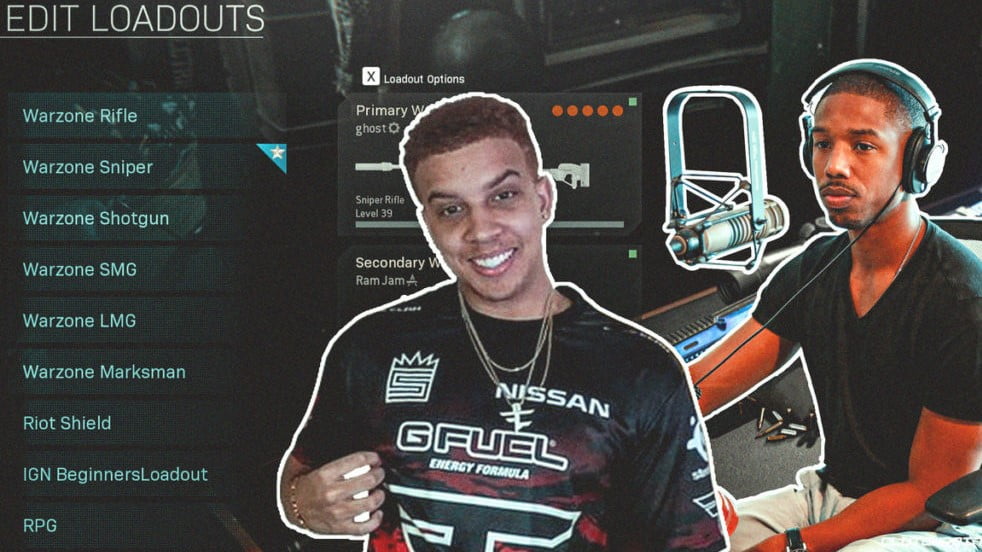 FaZe Clan superstar Swagg got to question award-winning actor Michael B. Jordan about his favorite loadout in an unlikely Call of Duty: Warzone crossover – and the streamer couldn’t help but roast the celebrity for his unusual class choice.

Michael B. Jordan is an entertainment industry superstar. He’s won and been nominated for scores of awards and also won the title of People’s “Sexiest Man Alive”. He’s acted, made, and been named one of Time magazine’s most influential people in the world.

Despite the fact that he has voiced multiple characters in video games, MBJ may not be a gaming superstar. At least, that’s what I got from Swagg’s reaction to the actor’s favorite Warzone loadout.

Swagg, a member of FaZe Clan and Nuke Squad, is one of the Warzone’s most popular streamers and earns a lot of money. But when he found out Jordan was running the AN-94 and PILA in Verdansk, he couldn’t help but be intrigued.

During a live stream with FaZe Clan’s Swagg, actor Michael B. Jordan revealed his Warzone loadout. It turns out that it wasn’t the best idea, as one of Warzone’s top streamers thought his loadout was hilarious. During a live stream, MBJ and Swagg discussed a variety of gaming topics.

MBJ appeared on Amazon to promote his latest film, Tom Clancy’s Without Remorse, which was released on April 30. However, the topic later shifted to Warzone, and Swagg inquired about Jordan’s preferences for the game.

Jordan will state that he recently won a game and shared his weapon loadout, which included an AN-94 and a PILA. Swagg laughs, referring to his loadout as a ‘guppy.’

FaZe Swagg had some thoughts on Michael B. Jordan’s Call of Duty Warzone loadout

Swagg and MBJ’s conversation revolves around standard gaming topics like mouse and keyboard versus joystick before the streamer inquires about Warzone. At that point, Jordan casually mentions a recent victory and then reveals his favorite loadout:

Swagg goes through several levels of emotion in seconds, from denial to utter laughter, before exclaiming, “no…you running with launchers?”
The beloved actor was given the opportunity to justify himself, pausing intermittently while Swagg continued to laugh: “It’s the joy you get from blowing up a helicopter, you know what I’m saying?” It’s the satisfaction you get from shooting it down.”

Although the AN-94 isn’t particularly shocking, the streamer found MBJ’s secondary weapon option to be amusing. In the COD Warzone Community, the PILA, a rocket launcher, is frowned upon. Jordan defends himself, saying, “It’s the thrill of blowing up a helicopter… It’s the satisfaction you get from shooting it down.”

Swagg had to explain to Jordan what was wrong with his loadout: “Look, man, in the Warzone culture, we look down on people who rock the launchers, man.” We really don’t get along with them, man.”

Meanwhile, Swagg must have thought MBJ’s loadout was amusing because he continued to test the loadout in some of his streams. He hasn’t had much success, which is to be expected when you lock yourself out with a rocket launcher as a backup tool.

Windows 10 Is Getting A Massive Improvement In Wireless Audio By Microsoft
iOS Users Opting To Get Tracked: Survey Reveals That Most Users Are Fine With Third Party Apps Tracking Them
Comment