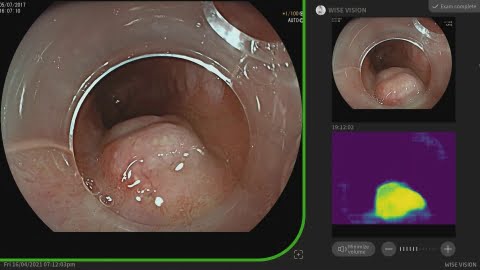 Endoscopy is the world’s first technology of its kind to meet the requirements for CE mark labeling, a European safety, health, and environmental protection standard (*1), and will soon be accessible in Europe to assist clinicians in the detection of Barrett’s neoplasia (*2).

This program, which is linked to endoscope processors, alerts users to the possibility of Barrett’s neoplasia based on images acquired during endoscopic treatments.

Barrett’s esophagus is a precancerous condition in which the inner lining of the esophagus is replaced with a stomach-like lining.

Barrett’s esophagus patients have a 30-40 fold increased risk of esophageal cancer compared to the general population (*3).

However, if this cancer is caught early enough, it can be removed with an endoscope and the patient can be cured. Barrett’s esophagus patients must have regular endoscopies (every 2-3 years) to detect early cancer.

However, this is difficult to do because early cancer alterations are subtle and difficult to detect. As a result, current guidelines propose doing repeated random biopsies along the length of Barrett’s esophagus to detect any early cancer foci (*5, 6).

Random biopsies, on the other hand, are costly and time-demanding, and only 30-51 percent of endoscopists (*7, 8, 9, 10) execute them in accordance with established clinical guidelines

NEC used its facial recognition technology, which has been highly rated (*4) by the National Institute of Standards and Technology (NIST) in the United States and is part of NEC’s “NEC the WISE” portfolio of cutting-edge AI technologies.

WISE VISION® Endoscopy was able to detect more than 90% of Barrett’s neoplasia in clinical trials (*12).

WISE VISION® Endoscopy is projected to lower the rate of neoplasia misses during endoscopy and improve outcomes for Barrett’s esophagus patients all across the world.

The British Society of Gastroenterology (BSG) awarded the Gut Award to the abstract that used this technology, which was presented at the BSG Campus plenary session.

It was also named one of the top endoscopic abstracts at United European Gastroenterology’s UEG Week Virtual 2020.

“WISE VISION® Endoscopy can detect very flat and tiny lesions in a fraction of the time it takes most endoscopists.

This method takes a still image of the neoplasia and transmits it to the upper right corner of a screen as a reference image for endoscopists.

It doesn’t end there it also has a heat map that displays the area where the AI-predicted neoplasia is present. In the Western world, WISE VISION® Endoscopy is set to change the endoscopic detection and therapy of Barrett’s neoplasia.

I’m sure clinicians dealing with Barrett’s esophagus are eagerly anticipating the start of this new (Wise) era in endoscopy “Professor Pradeep Bhandari, Chair of the ESGE Research Committee, shared his thoughts.

NEC’s goal in the future is to accelerate digital transformation in the medical industry by offering safe and secure goods and services, including AI, in order to foster a healthy and sustainable society where everyone may benefit from sophisticated IT technologies.