This version expands the availability of the ECG and irregular heart rhythm notification capabilities to more countries, as well as adding support for Apple Podcasts Subscriptions.

The ECG app and irregular heart rhythm notification capabilities are now available in Malaysia and Peru, thanks to today’s upgrade to watchOS 7.5.

In terms of size, iOS 14.6 is a substantial upgrade for iPhones, following iOS 14.5, which was released last month.

Outside of India, the new iOS 14.6 update adds support for the Apple Card Family, which was unveiled during Apple’s special spring event. In terms of the full changelog, the iOS 14.6 update adds support for Podcasts, including subscriptions for channels and individual shows.

It also adds the Lost Mode option for AirTag and Find My network accessories, which allows you to provide an email address instead of a phone number.

Apple has released watchOS 7.5 after a month of beta testing. While the majority of the improvements are performance-related, Apple’s flagship wristwatch now has a few additional functions.

For the first time, watchOS 7.5 provides the ECG function to Malaysia and Peru on Apple Watch Series 4 and later. Irregular cardiac rhythm messages are now available in both countries.

Users who have paid for subscription content in the Podcasts app can now listen to it on their Apple Watch.

The updated watchOS 7.5 software is currently free to all users across the world.

The update includes a slew of under-the-hood enhancements and bug fixes, as well as a few new features, as is normal for these things.

How to Update Apple Watch to watchOS 7.5

By updating your Apple Watch to watchOS 7, you may receive these capabilities right away.

Before you begin, make sure your iPhone is running the most recent version of the iOS software and is connected to the internet via Wi-Fi rather than cellular.

Also, keep your iPhone close to the watch so that they’re both in Bluetooth range.

Using your iPhone or the watch itself, you may upgrade the Apple Watch to the most recent version of the watchOS software. 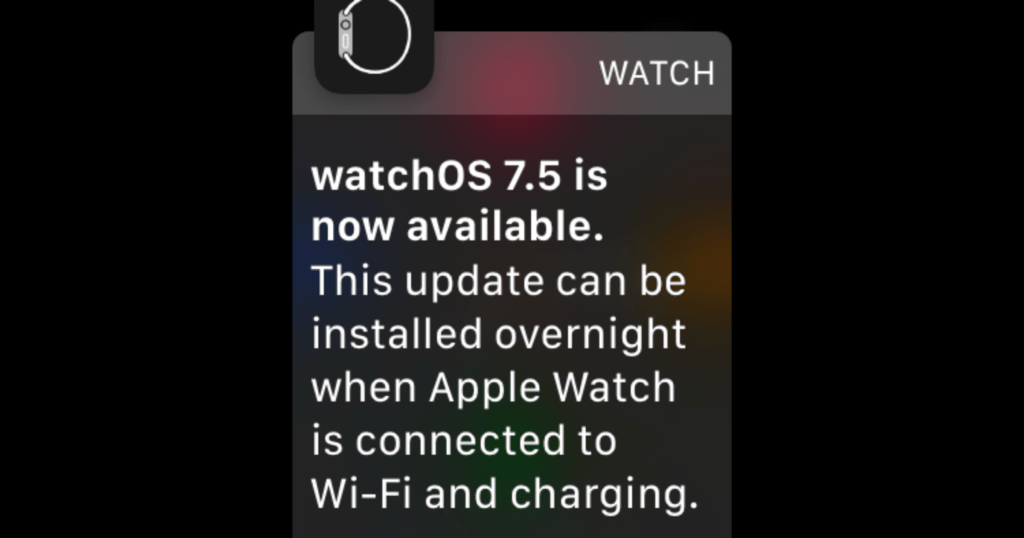 If you receive a notification that an update is available, download it.

During the update process, you may be required to enter your iPhone or Apple Watch passcode. Be prepared to wait, since watchOS updates can take anywhere from a few minutes to an hour or longer to complete.

To install watchOS 7.5 straight on your Apple Watch, navigate to Settings > WI-Fi and make sure it’s connected to the internet.

After that, navigate to Settings > General > Software Update to complete the process. If a window stating that an update is available displays, select Install and follow the onscreen instructions.