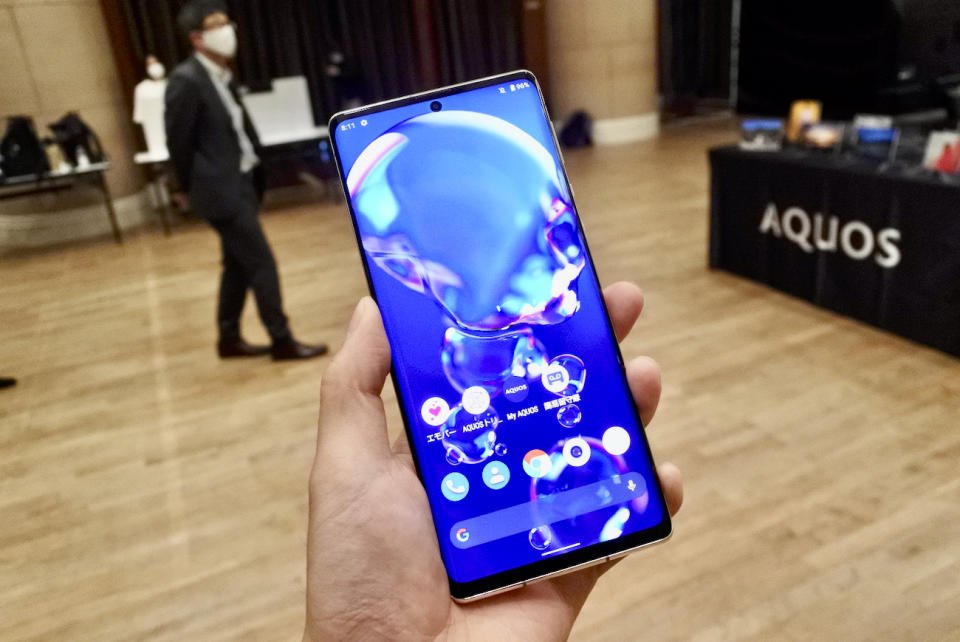 Sharp The Japanese smartphone manufacturer has expanded its smartphone lineup with the release of the Sharp AQUOS R6, a god-level smartphone.

It is named the god-level phone because it features the world’s first 1-inch camera sensor with an ultrasonic fingerprint sensor that supports two-finger unlocking.

The handset was initially released in Japan, with highlights including a Snapdragon 888 processor, a 5,000mAh battery, a higher refresh rate display, and much more.

The release of the Sharp AQUOS R6,  boasts crazy specs along with the world’s first 1-inch camera sensor it also has an ultrasonic fingerprint sensor and a two-finger unlocking feature.

As can be seen in the renders, the AQUOS R6 has a curved edge display with a centrally aligned selfie camera cutout.

The backside of the phone has a chunky camera module, which seems to house two cameras. The official renders show that the AQUOS R6 has a thick device.

The smartphone is expected to be released after mid-June when pricing information will presumably be made available. There is no word about when or whether the smartphone will be released in other parts of the world.

The AQUOS R6 is expected to be released as a follow-up to last year’s AQUOS R5G handset. The AQUOS R5G features a 6.5-inch IGZO display with a Quad HD+ resolution of 1440 x 3168 pixels and Dolby Vision and U-NEXT HDR output.

In June, Huawei is scheduled to unveil the Huawei P50 series of flagship phones. It remains to be seen if Leica will continue its relationship with Huawei now that it has officially partnered with Sharp.

Sharp and Leica have collaborated to create the world’s first smartphone with a 1-inch picture CMOS sensor. The sensor, according to the manufacturer, is five times larger than the predecessor and has enhanced focusing capacity. The camera kit includes a low-light autofocus feature that employs a laser to allow high-speed autofocus in low-light conditions.

The Sharp AQUOS R6 is outfitted with a 1-inch image CMOS sensor, which is 5 times larger than the predecessor. It employs a 7-element Leica Summicron camera capable of taking full-scale images in high resolution.

To improve security, the AQUOS R6 includes an ultrasonic fingerprint scanner, according to the company. Sharp claims that the authentication function is 11 times more comprehensive than the standard model.

The Sharp AQUOS R6 comes with a large 5,000mAh battery that supports Intelligent Charge 2.0. The phone is powered by Android 11 and has IPX8 certification, making it water and dust-resistant.

The price of the smartphone has yet to be announced by the company we will update this post as soon as it becomes available.