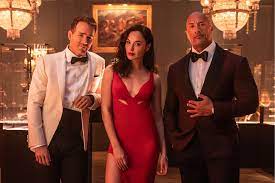 Red Notice is an action comedy film that was released on Netflix on 12th November 2021. It scored 6.5/10 on IMDb and 39% on Rotten Tomatoes. Red Notice has a 37% rating on Metacritic. It made the headlines for its fabulous star cast and viewers have loved it thus far! The only problem was the confusing ending. Before we get into that, let’s take a look at the star cast and other details of Red Notice.

Red Notice follows an Interpol agent on his hunt to track down the world’s most wanted art thief. The ending had so many twists that it left viewers royally confused! The three main characters- Dwayne Johnson’s John Hartley, Ryan Reynolds’ Nolan Booth, and Gal Gadot’s “The Bishop”- kept crossing each other until we didn’t know who had even crossed who and more importantly, how.

In short, John Hartley aka the person who was being chased this whole time doesn’t exist at all.

He’s a construct, a confidence game played by Dwayne Johnson.

John Hartley, or rather the pretend “John Hartley” tricked Booth and every one multiple times. He had even gone as far as forging his papers. In the end, John Hartley and The Bishop reveal they are husband and wife and were involved in this together all along!

Nolan Booth had been duped by them. He was left for Interpol by them but fortunately for him, he has a habit of escaping police custody!

He tipped off Das about the stolen eggs as an attempt to get back at The Bishop couple but this failed because they had already got the 300 million dollars they were after. He next hits them where it hurts, however, as he inexplicably finds a way to get Interpol to freeze their Cayman Island bank account.

A lot more chaos ensued and the ending was, to say the least, messy.

The whole plot was a rollercoaster ride!

Will There Be A Red Notice Sequel?

Although we don’t have any official word on a sequel as yet, there are high chances that there might be one. This is because the ending left a lot of open endings that could be built upon. There are a lot of loose ends to be tied up which could be one with a sequel. We’ll have to wait for an official announcement though!