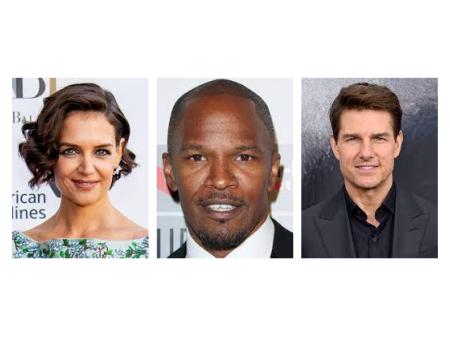 Katie Holmes is an American Actress, director, and producer. she has done some popular shows such as Dawson’s Creek (1998–2003) where she played the role of a teenage girl named Joey potter.

From that show had achieved a huge amount of fame and went to do some major films and huge tv series. While doing all this she told in an interview in 2001 that she has a crush on Tom Cruise. After that, she went on to do some major roles where she was doing a movie with Jamie Foxx and Tom cruise in the same movie. Katie homes were dating someone and Tom cruise had already been separated from her long time girlfriend and then when cruise and Katie did their first movie together that was the time when he realized he loves her and then they began dating in June 2005 and announced publicly that they are dating and just after a year of dating they announced that they re expecting their first baby together.

Katie gave birth to their beautiful daughter which the couple cherishes and loves wholeheartedly.

While this all was going on they had been pretty much in love but Katie Homes announced that she is moving towards Scientology and this could be happening for her as a new change and that she is ready for this new experience in her new life.

While this was happening Tom cruise and Katie decided to get married soon after the birth of their first baby together. After being together for a decade the couple decided to leave each other when Tom cruise wen to an event without his wife and soon after that the couple announced that they are getting divorced. After the 11 days of Divorce in 2012, custody was given to Katie, and Tim was given the right to see her daughter whenever he wants to and also the settlement was done properly.

After that, both went their separate ways, and soon after Katie Holmes started Dating Jamie Foxx after some time.

Jamie Foxx confessed that he is in madly love with the Actress, Katie Holmes and they announced their relationship publicly Because Jamie Was tired of playing hide and seek games and the couple went on to date each other and had many good times where they were clicked together having good times and looking after Each other.

The Couple Dated for six years and initially to part ways in 2019 when they were seen hanging around with different people.

This was confirmed by the Us magazine.

While some Believed that Katie Holmes used Jamie Foxx and Tom cruise as a stepping stone for her career but some believe the actress was talented from a young age and showed promising Roles for many Parts and that led to becoming a major hit and an Oscar winner. Right she is currently dating her new Boyfriend Emilio Vitolo Jr‘s the couple is together currently and during the pandemic the couple was not seen that much either. THey Noth started dating in 2020 only.