Jason Momoa and Amber Heard were a part of the movie Aquaman. They will next be seen together in its upcoming sequel, Aquaman And The Lost Kingdom. However, according to certain media reports Momoa doesn’t like his co-star and it makes it difficult for him to shoot with her. Amber Heard who previously worked with Jason in Aquaman was appreciated for her role of Mera. She was also signed for the second part of the DCEU movie. But Jason did not want Amber to be a part of the sequel. Instead, he pitched for his Game of Thrones co-star Emilia Clarke. Recently, fans stormed the internet with photoshopped images of Clarke as Mera. They also ran a campaign on Twitter to replace Amber and recast Emilia as Mera. However, there has been no official statement yet. Warner Bros and Emilia have not made any statement on this issue. Amber Heard was in the limelight during her controversy with ex-husband Johnny Depp. The Hollywood actor was accused of physical abuse by his wife and actress Amber Heard. But these claims were later proven false. Johnny also filed a defamation lawsuit on Heard. Since then fans want Amber to be replaced. Jason on the other hand hinted that he was supporting Johnny Depp and also expressed that he wants Amber to be removed from the sequel. Jason and Amber do not have a very friendly relationship. However, in an interview Heard claimed that she has a friendly relationship with Jason. But also labeled the actor as an attention seeker. She shared that Jason ripped off pages from her books which she carried on the sets of the movie.

Apart from all this, Jason’s longtime girlfriend now wife Lisa Bonet also expressed that she does not want Amber to be a part of the sequel. She also wants her to be fired from the movie Heard was a part of a lot of controversies. Bonet feels that Amber Heard is known to use men for her career. She does not want the same to happen with Jason. Lisa is also not very keen on Amber and Jason’s relationship. She is quite upset with the growing closeness between the two.

It would be interesting to see if Amber is a part of the movie or she is replaced. As neither fans nor her co-star wants her to be a part of the sequel. Well, for this we need to wait for the official announcement to be made by the production. 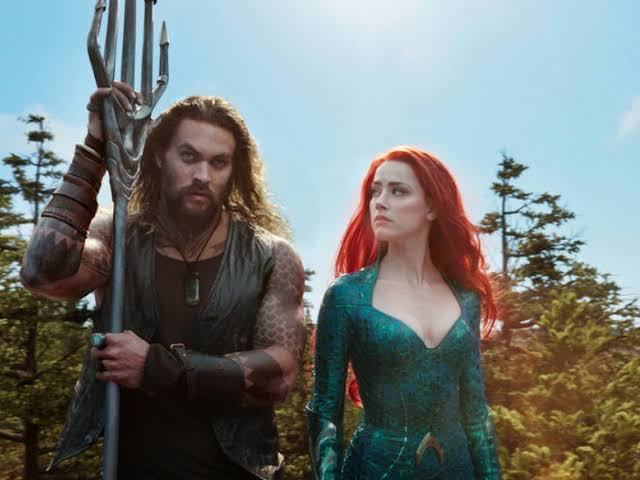 Aquaman and the Lost Kingdom is the second installment of Aquaman. The first part was released in 2018. James Momoa played the role of Aquaman whereas Amber Heard played the role of Mera. The other cast includes Willem Dafoe, Patrick Wilson, Dolph Lundgren, Ludi Lin, Yahya Abdul-Mateen II, Temuera Morrison, and Nicole Kidman. The sequel Aquaman 2 will be released in December 2022.

It will be interesting to see the chemistry between the co-stars after their off-screen rivalry. We also need to wait for any announcement in case of Amber Heard’s replacement. It would be quite exciting to see if Emilia Clarke is recast as both Jason and fans are wanting her to be a part of the sequel.