Jaden Smith created news when in a performance he declared that he was dating Tyler the creator. Adding to this Tyler has been seen in various ads that often point that the star is not straight and supposedly belongs to the LGBTQ+ community. But are they dating? What incidents, in particular, led to such speculation? Let’s get going to explore the timeline of the stars further.

Jaden Christopher Syre Smith is the grammy award receiver and is even known for his role in The Get Down on Netflix. He is the son of Will Smith and Jada Pinkett. On the other hand, Tyler Gregory Okonma is commonly known as Tyler, the creator is yet another Grammy award receiver who is famous for his popular release Flower Boy. The rapper in 2021 released another album named Call Me If You Get Lost. Jaden and Gregory have been seen collaborating and releasing projects together like Single Noize and seem to share quite a great bond. In 2017, Jada and Will’s son was seen performing at a concert that was held in California at the Camp Flog Gnaw. The rapper in the middle of the performance was seen addressing the audience and making the declaration stating that Tyler was his best friend and that he loves him so f****ng much. Adding to this he said that wants to announce that Tyler is his boyfriend and has been once for his whole life even though Tyler doesn’t want to come out and say it. Interestingly, Tyler the creator was present in the audience and just saw his best friend or as per the announcement his boyfriend making such an announcement. 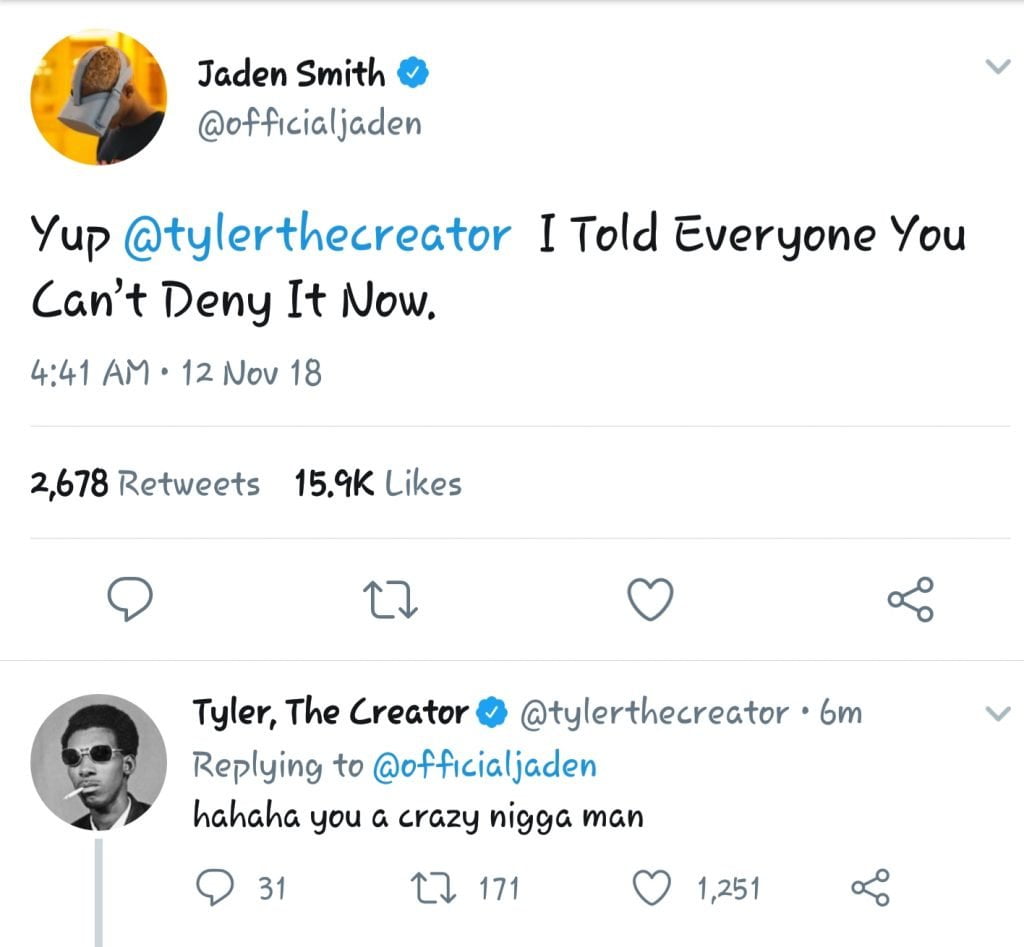 Later the Get down actor was even seen tweeting on the same incident and even tagged the rapper. The tweet stated that he has told everyone about them and Tyler himself cannot deny it to which Tyler was seen laughing and calling him a crazy man. Jaden was even seen tweeting in 2020 when Tyler the creator won a grammy by saying that his boyfriend has won a Grammy.

My Boyfriend Just Won A Grammy

Tyler On His Sexuality

Tyler who has always been in news for his sexuality thinks that he is more open when it comes to labeling his sexuality. The star has been spotted wearing a rainbow-colored outfit and holding a guy’s hand for an advertisement. His tweets even refer to him not being totally straight one of which goes like that he tried coming out of the closet for four days and no one actually noticed. Adding to this he was even seen replying to Kendall’s tweet of we are dating by saying that it is not possible cause they both are gay.

While the speculation gets stronger, the possibility of the two being together for a long time can’t be denied altogether. Tyler however has not seen responding to any of Jaden’s tweet that gives us the final confirmation. Even in interviews, the rapper has responded by saying that for now, he is just living his life. Jaden was also spotted, kissing model Cara Delevingne this year on valentine’s day. So, the possibility of two being in a relationship or just being platonic best friends is 50/50. Stay connected for further updates.