Finally, the wait is over for the Disney fans and the ones who loved hocus-pocus we are back with a piece of good news for all the fans, after the tremendous love which was given to Hocus Pocus the makers have decided to give their audience a surprise but, wait you will have to read the whole article to know Hocus Pocus 2 release date and if you are interested in knowing more about Hocus Pocus 2, where it is being filmed? what is the cast? and how are the makers dealing with covid while shooting for hocus pocus 2 and to know the plot just dig in the news!

All the fans must be jumping out of joy that Disney has already started shooting for Hocus Pocus 2 and this time the plans are significant. The shooting of the second sequel is to begin on October 18 2021 as said by Steven Weinberg, executive director of the Rhode Island films and television office.

The fans will be very excited to hear that we have got to know that in Lincoln’s chase farm park and crafts in street the media discovered that some sets have been made to replicate the New England village of the 1670s.

We also got to know that in lincoln’s chase farm the production team started the work and have applied for a format to burn down an entire village for Hocus Pocus 2. The permit is to be issued by the State Development Of The Environmental Management. Somehow the production has managed to work with the special effects only and not to damage the whole village and burn It down. Disney has taken over the Drill Hall of Cranston Street Armory in Providence, Rhode Island, to use as a soundstage to shoot scenes using a green screen and special effects. Professional cast members and stunt people will be using safety harnesses to simulate flying. How Is The Production Team Dealing With Covid-19?

Talking about the team of hocus pocus 2 is pretty much concerned about the health of the crew members and the cast, and everybody present on the set. Covid tests for all the team are being performed three times a week so that everyone who is involved in the production is safe.

Also Read: Nightbooks 2 To Release Next Year? Will The Story Continue?

About The Storyline: Some Spoilers For You All

‘Three Young women break into the Salem Witch Museums Sanderson Sister exhibition. A living museum based at the original site the sisters lived in the 1600s. Intrigued by the legend of the Sanderson sisters they accidentally resurrect Winifred, Mary, and Sarah. We discover that one of the young women Emily is Dani Dennison’s daughter (rumored to be played by Madison Pettis). Dani helps track down and recruit Allison and they both attempt to find Dani’s Brother Max, who is now living in New York. But the witches are on their trail, intent on transferring their spirits into the youthful bodies of Emily and her friends. Bette Midler, Kathy Najimy, Sarah Jessica Parker, Omri Katz, Vinessa Shaw, Thora Birch, Doug Jones, Larry Bagby, Tobias Jelinek, and Sean Murray are all reprising their roles. There are two new songs, one of which is a big broadway number sung by Winifred when she puts an entire Broadway audience under her spell. There is a hilarious scene in a casino with Mary and Sarah. Nick Offerman is joining the cast as ‘Master’. 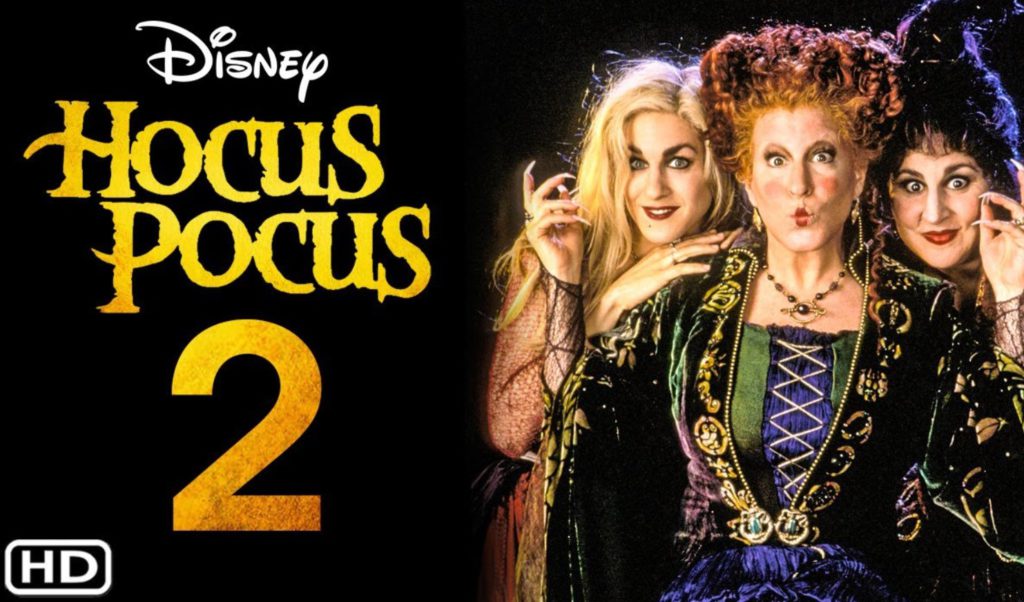 The Sanderson Sisters are shocked that Halloween is only 100 days away!

we have not got a piece of confirmed news about the Hocus Pocus 2 release date, but the fans can expect it to make an entry in autumn 2022.