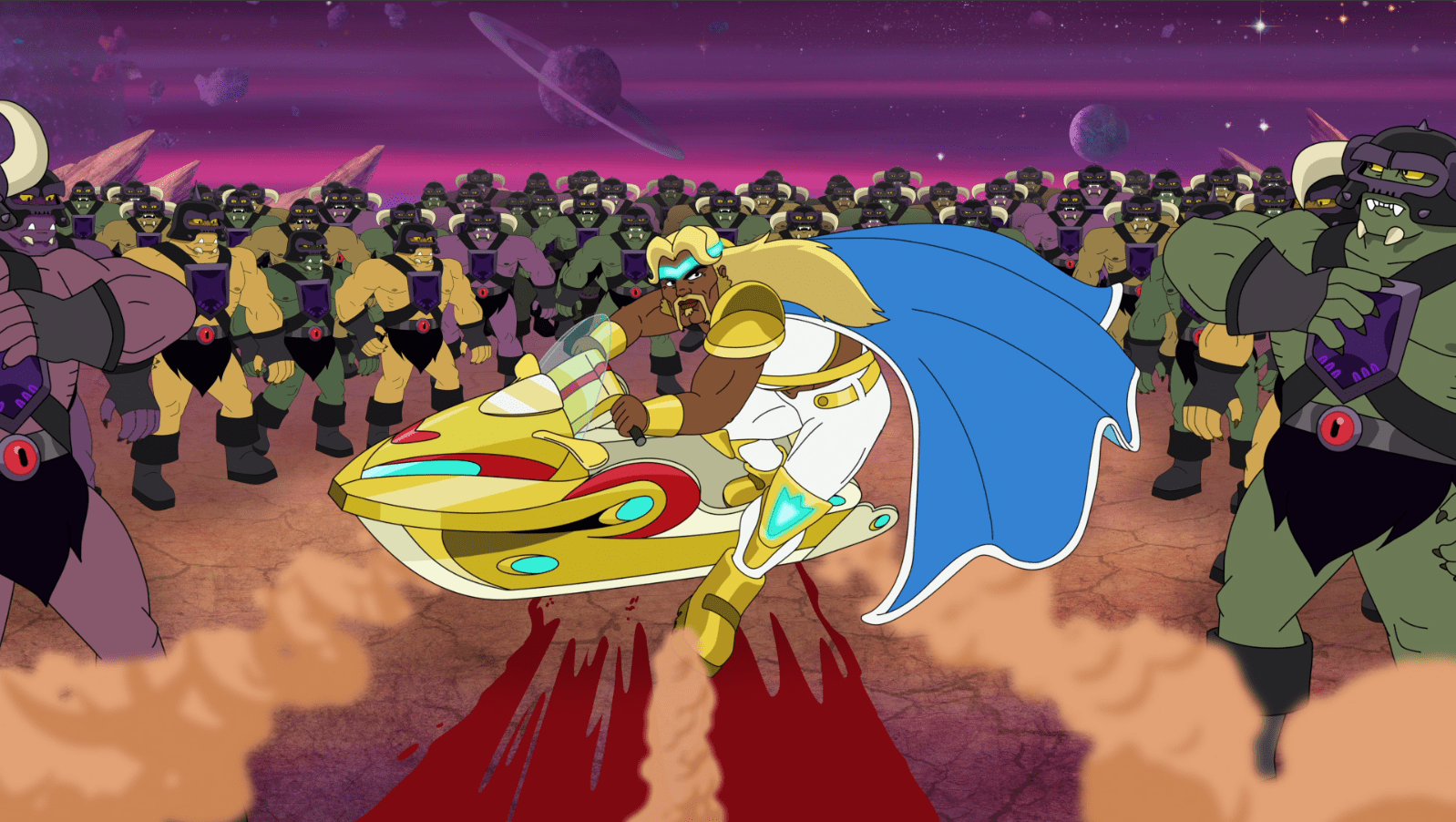 Netflix has released an official full-length trailer for the series at the Geeked Week 2022 and has also announced the date of release of the series. The story of Farzar will be focusing on an egocentric warrior named Renzo. The warrior liberated the Farzar planet from a devilish alien, Bazarack. Renzo attempts to shelter a human settlement under a huge dome to keep the human beings protected from the ecosystem of the aliens by becoming the Czar of Farzar.

The plot will also be following the son of Renzo who is a prince named Prince Michael as he and his dissenter troupe struggle in combating the evil aliens far outside the dome-protected series. The name of the crew of Fichael is S.H.A.T (Special Hostile Assault Team).

Prince Fichael sets out with his not-so-bright crew for defending the planet just to prove to his parents that he is not useless but a fierce, great warrior. The crew of Prince Fichael consists of a human-soldier-turned-cyborg, Scootie, an unhinged scientist Barry Barris, clashing conjoined twins Mal and Val, and a mischievous little alien Zobo.

As Fichael and his troupe start to fight with the aliens, they realize that everything is not what it looks like and there is a possibility that he could be living a lie. Fichael’s Mother, Queen Flammy is shown spoiling her son, and also, her mild old age forces her to talk to her husband about running the city which he thinks is a good plan but later gets blamed for the decisions with approaching shortcomings. The series has been announced by Netflix with its banging trailer in Netflix’s Geeked Week 2022. The date of release of Farzar is 15th July 2022 on Netflix.

How many episodes are going to be there in Farzar Season 1?

There will be a total of 10 episodes which will be full of comedy, action, and animation.

The cast of the new series, Farzar includes many talented and passionate voice artists from the film and television industry. The list of the entire main and supporting cast is mentioned below, excluding the recurring and guest cast: The trailer shows Farzar getting freed from the clutches of Bazarack. Bazarack is the diabolical leader of a group of evil aliens. Renzo is shown setting up a human civilization on Farzar and marrying their ruler, Queen Flammy, who is a slightly old-age woman and takes power over the planet.

Then his kind-at-heart but naive son, Fichael, expresses his desire to be a general and help the planet to get rid of evil by forming a Crew.

The official synopsis written by Netflix was:

“From the creators of Brickleberry and Paradise PD, Roger Black and Waco O’Guin comes the outrageous sci-fi animated comedy series Farzar. Egotistical human warrior Renzo liberated the planet Farzar from the evil alien Bazarack, and then established a human settlement under a huge dome, becoming the Czar of Farzar. Years later, Farzar is under attack by the evil aliens once again and Renzo’s well-meaning and not-so-bright son Prince Fichael ventures out with his special crew “S.H.A.T” (Special Hostile Assault Team), made up of a human-soldier-turned-cyborg (Scootie), clashing conjoined twins (Val and Mal), an unhinged scientist (Barry Barris), a highly incapable mutant (Billy) and a mischievous little alien known as a chaos-celot (Zobo). As they begin their journey to fight the aliens that want to kill/eat them, Fichael quickly discovers that all is not what it seems and he may be living a lie.”

With Netflix releasing the trailer to the audience, we could figure out how unapologetic and wild the series is going to be. The series looks like it has taken its roots from the show Futurama or Rick and Morty in the intergalactic reference.

It looks like the series contains a little bit of everything which includes: robots, violence, dark humor, weird alien creatures, unfair fights to the death, awkward sexual jokes, explosions, naked gymnastics, and most visibly, a really big mouth.