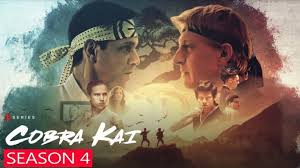 The wait of the fans has come to an end as the release date of Cobra Kai season 4 has been made public recently. Season 4 will be premiered on Netflix in December 2021. Trailers of the Cobra Kai which were made public recently, have got the audience all excited to watch the series. Some quotes along with the teasers indicate some things about the plot of Season 4 Cobra Kai. Cobra Kai Season 3 was already a superhit by attaining top position in almost 28 countries and being in the queue of top 10 superhits in around 85 countries. Season 3 of the series presented great action with the battle at Chateau LaRusso and the come back of Elisabeth Shue cast as ‘Ali’. The Plot of Season 4

Cobra Kai Season 4 will be centered around the greatest action between the joint forces of Eagle Fang dojos and Miyagi Do fighting against the Cobra Kai in a tournament. Season 3 observed the coming together of  Eagle Fang dojos and Miyagi. The winner of the tournament will invade the valley while the loser has to leave the place. The story will be centered around the students preparing them for the competition and then fighting Cobra Kai to win back their valley. The main leads of the series Sam and Hawk will battle against the villains, Robby and Kyler. As depicted in the trailer, Terry Silver will make a debut in Cobra Kai and will give some financial help to Cobra Kai. Season 3 already witnessed some glimpses of friendship between Kreese and Silver. The trailer portrays the presence of Silver in the series when Kreese called him for help. This indicates that Kreese and his Cobra will be helped by Terry Silver.

The Karate Kid 3 star, Terry Silver, will make a strong comeback in Cobra Kai Season 4. Original characters of Daniel LaRusso and Johnny Lawrence will be played by Ralph Macchio and William Zabka respectively. The role of Robby will be played by Tanner Buchanan and that of Hawk will be played by Jacob Bertrand.  Xolo Mariduena will be cast as Miguel whereas Mary Mouser will be cast as Samantha. Martin Kove will continue to play the role of Kreese. Dallas Dupree Young and Oona O’Brien will make their appearance in the series as Kenny and Devon. Thomas Ian Griffith will play the character of Terry Silver. There is no confirmation regarding the roles of Aisha and Nicole Brown but it is assumed that they will also be cast in the series Cobra Kai.

Also Read: Will Owen Wilson Return As Lightning McQueen In Cars On The Road Disney+ Series?

Netflix show Cobra Kai Season 4 will be out for fans on 31 December, Friday in 2021. The trailers have already revealed the masters of Miyagi do and Eagle Fang dojos coaching their students to fight against Cobra Kai in order to take back the valley in the All Valley Tournament.

Like its previous hit seasons, Cobra Kai Season 4 is also presumed to be a superhit. Stay tuned and watch your favorite series Cobra Kai to be a witness of the greatest action sequence of the year.