The rumor of Captain America actor Chris Evans and singer Selena Gomez have been in the news for over a month now. The rumor was suddenly ignored in the month of October after the actor suddenly started following Selena on Instagram. Soon after the singer followed him back too. This led to the speculation of the two dating and fans went crazy when these rumors took such an ignited turn hoping that these two might be the next “IT” couple. However, the two have not been spotted together or have spoken about the same till now. But the fans think that Selena might have hinted about the rumor when she was spotted wearing an oversized sweater that although didn’t belong to the captain America actor but quite resembled the one that he wore in Knives Out. This ignited the rumors even further and they have not settled since.

Amidst all these rumors Selena was seen creating buzz for yet another reason. Selena was seen kissing her long-term friend Cara Delevingne which soon took to headlines and further led to many interesting theories coming up. Well, to know more about the incident and the theories you need to dig deep in the lines that follow.

Selena Kissed Cara: All You Need To Know

Recently on November 17 Cara Delevingne and Selena Gomez were spotted at Madison Square Garden in New York City at a basketball game where they came to watch a face-off between the Knicks and Orlando Magic. It was during the game that Selena initiated a kiss on Cara’s cheek which was displayed on the jumbotron in the “kiss cam” moment. The kiss cam moment is one where the camera scans the entire crowd and thereafter zooms or focuses on a couple who are about to have an intimate kiss. This, however, was not a proper kiss cam moment but their cheek kiss was enough to make a huge headline.

Selena was spotted wearing a turtleneck black sweater and a camel shade trench coat over it. The singer paired the outfit with knee-length black shoes and red lipstick. The model on the other hand was seen in an all-black casual outfit accessorized by white sneakers, a gold chain, and a messy bun. The two share a special friendship for a very long time now. Cara who dated Ashley Benson came ut as Pansexual in 2020 while the singer has previously been in a relationship with Justin Beiber and rumors are that she is currently dating Chris Evans. 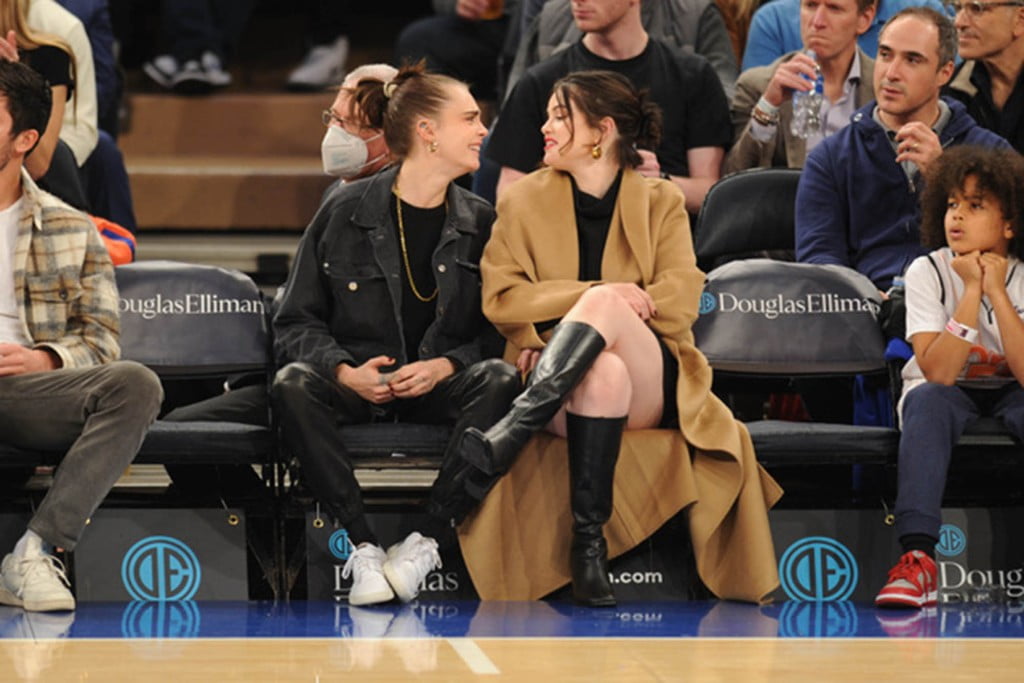 Theories And Speculations Hitting The Market

Even though the two just shared a cheek kiss but the moment that happened between the two led the fans to think that there might be something else cooking up. Cara was seen shyly giggling and smiling after the moment. At first, they seemed a little hesitant to make such a move. However, the singer leaned forward and was seen planting a quick kiss on the model’s cheek. This was followed by speculation that doubted Selena’s sexuality. Responding to the “GAY” rumors in an interview Selena said that she had no issues with the rumors and fans linking the two together. She also revealed that she once questioned her sexuality and thinks it’s completely normal as everyone at point does it.

Is Chris Angry After The Whole Incident?

Well, after the whole incident the fans were curious to know Chris’s reaction on the whole incident as they highly doubt that the two might be in a relationship and are all up for shipping them. This generated another rumor that Chris might be angry after seeing such a moment happening between the two.

But for now, all of these are nothing but rumors as neither of them have given any confirmation on the rumor and thus nothing can be said as such.