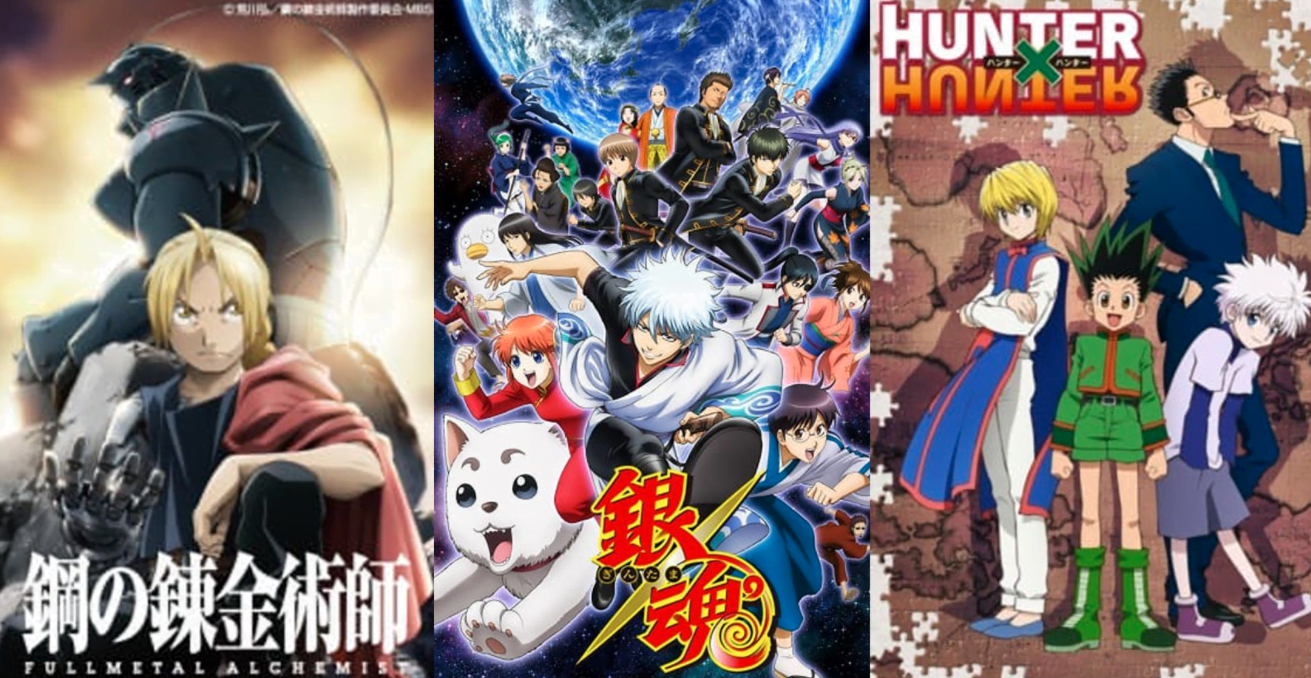 Action anime is such a genre that provides us with a boost of energy. When people are tired of watching a slice of life and romantic comedy, they tend to watch something that will give them an elevated feeling. There are quite a lot of action anime available out there. But that does not mean each of them is good and worth watching. Some of them are boring. Some of them are not just worth it. In one word, you shouldn’t choose your anime without checking its rating. So, here is a list of the top 10 Best Action Anime of all time. The list is arranged in order, according to the ratings on MyAnimeList. The anime are available on Crunchyroll, Funimation, Netflix, and Amazon Prime Video ready to stream. Fullmetal Alchemist: Brotherhood (2009-2010) is an alternate version of the previous Fullmetal Alchemist (2003-2004) anime. Its weighted score is 9.15 (scored by 1,655,710 users). Brotherhood is often considered the superior series, mainly because it’s faithful to Hiromu Arakawa’s original manga and completes the entire story. This action anime, which also falls under the genres military, adventure, comedy, drama, magic, fantasy, and shounen, follows brothers, Edward and Alphonse Elric, as they search for the Philosopher’s Stone. After an attempt to revive their mother resulting in a horrific accident, the stone is rumored to restore Alphonse’s body and Edward’s arm and leg. Half of the action genre’s top ten were related to Gintama (2006-), but the top-rated series out of all of them was the fourth season (2009-2010). Gintama° encompasses episodes 266-316 with a weighted score is 9.09 (scored by 175,304 users). This action anime also falls under the comedy, historical, parody, samurai, sci-fi, and shounen genres. Gintama takes place in an alternate-reality Edo in which swords have been banned, and Japan is conquered by alien overlords.

The 2011 adaptation for Hunter x Hunter has received high praise, receiving a weighted score of 9.05 (scored by 1,293,282 users). It’s a remake of the fan-favorite Hunter x Hunter anime from 1999, but while the 90s show ran for 64 episodes, it ran for 148 episodes. In this world, being a hunter is a viable but dangerous career. Various hunters, from those who capture criminals to those on the hunt for lost treasures, and even some who cook. This series follows twelve-year-old Gon Freecss and his friends as they take the Hunter Exam and travel the world to make their dreams as hunters come true. In the dystopian world of Attack on Titan, people live in communities surrounded by enormous walls to keep out gigantic man-eaters known as Titans. The series follows Eren Yeager and the Survey Corps, who are on a mission to protect the people and stop the titans. Code Geass: Lelouch of the Rebellion R2 (2008), the sequel series to Code Geass (2006-2007), has a weighted score of 8.91 (scored by 999,623 users) and also falls under the military, sci-fi, superpower, drama, and mecha genres. Lelouch Lamperouge serves as the masked vigilante Zero on a quest to create a revolution to topple the Holy Britannian Empire. It’s an original anime series that won numerous awards, including “The Best TV Animation” award at the thirteenth Animation Kobe event and “The Most Popular Anime” award at the Animage ‘s 30th Annual Anime Grand Prix. Another series, Mob Psycho 100, has a weighted score of 8.81 (scored by 695,738 users). In addition to action, the anime is listed as a slice of life supernatural comedy. Shigeo “Mob” Kageyama is a supernatural psychic growing into his powers. He works with his mentor Reigen Arataka to take on supernatural requests that range from exorcisms to battling urban legends. Kizumonogatari III: Reiketsu-hen (2017) is the third movie adaptation of the Monogatari Series. It’s actually a prequel to the second film. It has a weighted score of 8.81 (scored by 216,875 users), and the action anime also falls under the genres mystery, supernatural, and vampire. Originally a light novel series, the Monogatari series focuses on high schooler Koyomi Araragi after surviving a vampire attack. Following that incident, he consequently helps girls deal with supernatural phenomena. Kizumonogatari III: Reiketsu-hen takes place after Koyomi revives the legendary vampire, Kiss-shot Acerola-Orion Heart-Under-Blade, and becomes her servant—and a vampire! One of the most famous anime of all time in the United States, Cowboy Bebop (1998-1999), is a big reason many Americans, in particular, became anime fans. It has a weighted score of 8.77 (scored by 737,728 users), and it also falls under the adventure, comedy, drama, sci-fi, and space genres. The series takes place in 2071 when Earth is uninhabitable, and humans live on colonized planets and moons. The anime focuses on a ragtag team of bounty hunters, Spike Spiegel and Jet Black, joined by a genetically engineered corgi named Ein, femme fatale Faye Valentine, and whiz kid Edward Wong. Vinland Saga (2019), an action anime that also counts in the adventure, drama, historical, and seinen genres, earned a weighted score of 8.73 (scored by 511,243 users). The 24 episode series is an adaptation of the first volumes of the manga. Thorfinn lives as a mercenary and dreams of Vinland, a legendary place where there is no need for fighting. As the war between England and the Danes rages on, that place seems like nothing more than a dream. Out for revenge against the man who murdered his father, will Thorfinn the Viking ever know peace?